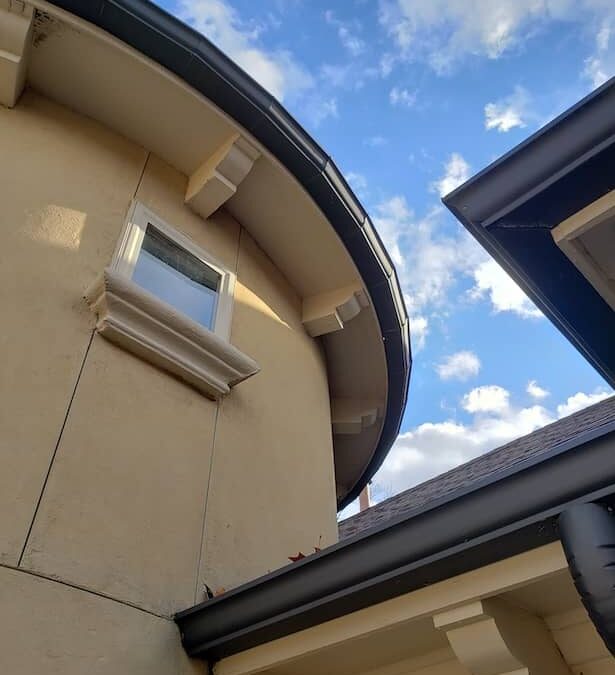 Welcome to advanced commercial systems home with the roof nerds. Hey, my name is Marty Grisham, the owner and founder of advanced commercial systems. And I am the original roof nerd. I want to talk to you today on our podcast, about a lot of wonderful things concerning commercial and residential roofing. Today, we want to talk along the lines of storm damage. Have you ever had storm damage? Um, storm damage can come in many different varieties and forms. It could be wind. It could be hail. It could be well tornado, which could be wind inhale. Uh, it could be, um, snow and ice building up creating a big ice dam. And as that ice dam begins to melt suddenly the next thing you know, you’re having water pouring into your building, whether it’s a residential building or whether it’s a commercial building, it doesn’t matter. Every type of building is possible for having storm damage, which is why you need commercial roofing Tulsa specialists!

Now let’s talk about high winds. First, what I do the most often, uh, with commercial roofing is I build what’s called flat roofs. A flat roof is basically, um, according to the national, uh, uh, roofing contractors association. The NRCA a flat roof is more defined, a better defined to be a low slope roof. Low slope roofs are around two 12, three, 12, and less now low slope roofing. The reason why we use thermal plastic flat roof membranes, Thermo plastic, like PVC or TPO, those big white plastic roofs. You see, um, that real thin plastic sheet there. They’re laying out and welding the edgecos together. That’s what they’re putting all the time. And that’s what we’re installing all the time. Our commercial roofing Tulsa roof nerds are absolute professionals at installing thermal plastic roofs in commercial roofing, Tulsa. So, but getting back to our topic today, storm damage in Tulsa, in our local area, wind is a number one culprit.

Now some people think, well, hell is what we get wind all year long. We get hail just seasonal. And so the land that we have here, uh, for flat roof, flat commercial roofs, um, you probably get around 90 miles an hour and you really start causing quite a bit of damage to these flat roofs that we’re having in Tulsa anywhere between 90 and 120. Um, I know there’s a big building in town called corporate woods. They have an, uh, they have a thermal set roof, which is a black EDDM roof here in commercial roofing, Tulsa. Um, they’re off of 41st and olive. They’re off of broken arrow, you know, right there around broken air and Tulsa, a really huge building, a buddy of mine who is one of the guys that works there, a real good friend. Um, so basically they had us come out a few years ago and look at that roof.

And there was wind that came, um, from the Southwest or the, yeah, there was a Southwest, it was an unusual Southwest wind that came, hit the side of the building. Come up over the wall here in commercial roofing, Tulsa come up over the wall and created lift as it hit the flat roof. What that means is basically the same way an airplane wing can fly when a wind, uh, air goes over and under an airplane wing, the airplane wing, the top side is shorter in less on the bottom side. So as the wind goes over and under the wing, it creates lift, which causes the wing to suck up. So literally you would think that you you’re going up in the air. Um, and you think wind under the wing is pushing the wings up, like when you’re in an airplane, but that’s not necessarily what’s taking place.

What’s taken place is a lift is actually pulling the wing up. So the aircraft is being pulled up by the lift that is pulling on the top of the wing. That’s exactly what happens when you have a strong wind come against the wall of a commercial building because our commercial roofing Tulsa roof nerds, I’m telling you we’ve been a Hagen’s veneering, we’re certified with engineering on how all this stuff takes place. That wind will come against a wall up and over the parapet wall side of the wall. And as it hits that roof, it is creating what we call lift and it literally can lift up the roof off of the building. Uh, I just had a good friend of mine, Mike, who, uh, actually has a commercial roofing company or residential roofing company. He’s got a building right off of broken air expressway. He called me about, I don’t know, was it nine months ago and said, Marty, I’ve got a trouble.

Can you help me? What do you got? My, he said a big wind came and lifted half of my roof off of my building. We see this all the time here. Uh, we have these, these winds that just show up, you don’t even need a tornado. They’ll just show up with these gusts, these blasts. I can’t remember what they’re called, but they’ll just shoot down here in commercial roofing, Tulsa, they’ll shoot down from the sky, hit the ground, and then spread out, creating tons of lift on commercial and residential roofing homes. And so I just want to talk to you today about the problems with wind. One of the big problems with wind is, um, you never know when it’s going to come and I tell you the one thing windows is really begins to show if there’s any errors or any flaws in your commercial roof that you have on your building.

I’ve seen quite a few, uh, buildings get extensive wind damage when they shouldn’t have, but the reason they had that was because the roof was not installed correctly. So here’s what we do when we install a flat roof for a thermoplastic or a thermoset roof, the manufacturer of the products we are use versus [inaudible] mule, hide GAF. Uh, we use, um, you name it, you know, John Hauser, not John Housman, but John Mansfield, John Houseman was a realtor, John Mansfield, uh, so many different, you know, Carlisle, so many different, uh, Versico we’ve used a lot, um, and definitely mule hide. Um, w we use so many different types of flat roofing systems. And every time we do that, we have to follow the specifications of the manufacturer in commercial roofing Tulsa. The reason why for that is when it comes to regional commercial roofing, the customer is going to know when he shows up for work one day or the business owner, and essentially the roof is not even in place anymore.

And because we are guaranteeing to install the roof, according to the manufacturer’s specifications, one of the very first things we must do is we must make sure you’re the decking of your roof, your metal decking, or whatever decking it is. We’re going to install the new roof on actually meets requirements. It needs a gauge like 26 gauge 22 gauge. You know, it needs a gauge requirement. If it’s a metal roof, if it’s a metal decking for us to be able to screw the screws through it here in commercial roofing Tulsa, with our roof nerds, so that you will be able to have the full capability of withstanding lift when that wind comes and it can come tonight, it can come tomorrow. Uh, it’s going to come. And when it comes, it is going to lift your roof up. If your roof is not secured down properly, we have to use the proper screws that can hold, um, up to 300 pounds of pool pressure per every screw.

And that’s the minimum. The minimum of pounds is 300 pounds. So these are the things that we’re doing now. We’re equipped to handle whatever roofing situation you have. That’s why now we’re an emergency roofing company as well. So here in commercial roofing Tulsa, our roof nerds are literally the best at answering the phone. I hear this every single day, I got a call about a year, year and a half ago. Um, it was a like at maybe like at nine o’clock at night. Let me tell you something. Roofing companies did not answer their phone at that time, but our Ruth nerds do, I answered the phone. My office brought it directly to me. And when I answered the phone, it was a gentleman that said, my roof just blew off my building. Can you show up here? It’s supposed to rain tomorrow night. Can you insert a small building?

Can you fix this, put a tarp on it or do something? Well, I said, I’ll talk to you at six o’clock the morning. Let me get busy for you. I made some phone calls to some other roofers. Some of my roofers had some product, plenty that was needed to take care of this situation. I ran out about five 30, six o’clock that morning. I met the building owner, you know, the next morning. And by the way, remember a commercial roofing Tulsa, uh, all of our fans out there, it was going to rain. I mean, it’s raining that night. This was like two days before Thanksgiving, about a year and a half ago. And so we show up, I call my crew. They come in by seven 30, we clean the mass out of the parking lot. We put new one inch insulation on the roof.

We come in and make sure everything’s fastened down properly. And then we jump in and throw a new TPO, new coping cap, wrap up the front of the roof, make everything watertight. And we do all of that in record time. It rains that night, and there was not one issue, not an issue at all here in commercial roofing. Tulsa. Let me tell you, our roof nerds were quick to respond with quick to take care of you. Check us out online. This is the end of our podcast today. Our online presence is www dot [inaudible] dot com. You can look for a roof nerds, Tulsa on Facebook, or give us a call at (918) 973-1010. Why would you call us? Because we build smart roofs.