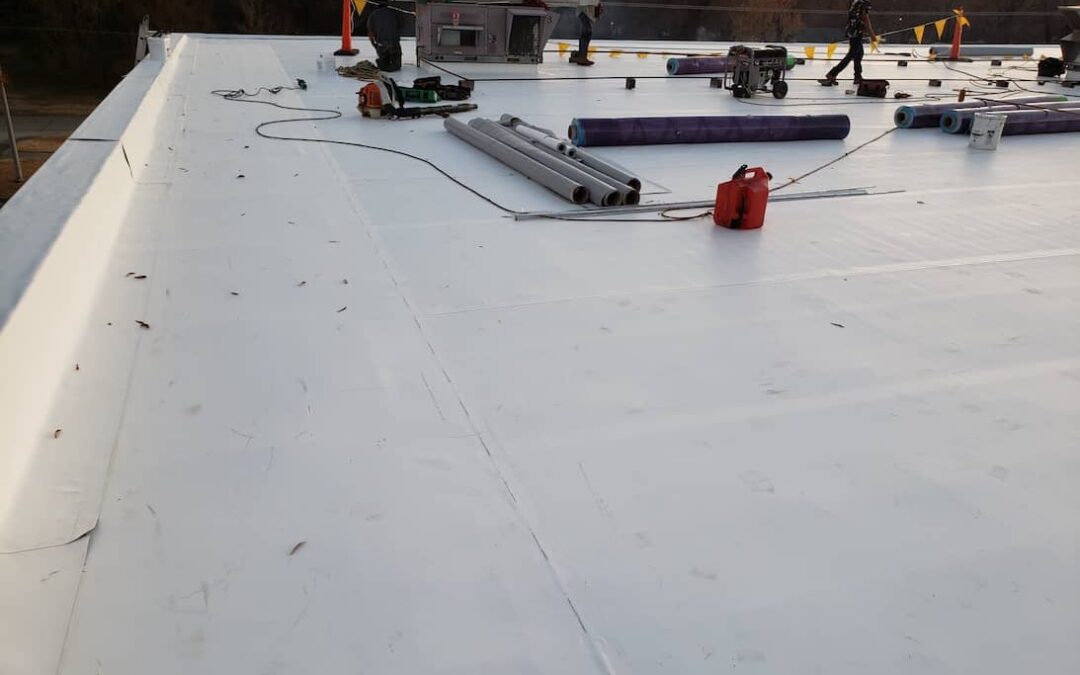 Hey, it’s Marty Grisham with advanced commercial systems home with the roof nerds. I want to thank everybody once again for joining us for another amazing daily podcast. Well, over 380 podcasts that we have personally done and talking mostly about the commercial roofing environment and what we do here in commercial roofing, toll swim. Uh, the one thing I want to tell you today about our, our, our podcast today is I want to do some comparisons, um, between residential and commercial roofing. You know, it’s funny years ago, I had a friend, a real good guy’s name was Brandon. And he walked up to me. He said, man, you do commercial roofs. Cause he was a residential guy. And he walked up and said, man, you do commercial roofs. I say, I sure do. He said, man, I, I really, I really honor that because, uh, man, they must be so hard and it looks, they look really complicated and I just kinda just perspectively just said to him, well, you know, it’s, um, it’s not rocket science, it’s roof science.

And that’s when it really dawned on me that that’s, that w I wanted that to be my slogan. It’s not rocket science, but it is roof science. So there is some complicated aspects to commercial roofing. And that’s some of the things that we want to talk about today. Um, let’s talk about 95% of residential roofing or more is basically coming in and put in a shingle on a roof. Now there is some science to, if there is some aspects, there is some things that need to be done. Um, like for one thing, specifically, our roof nerds here with commercial roofing, Tulsa, I never do a residential roof without putting ice and water shield in all the valleys. I mean, all the valleys, there is no Valley or no low slope area that I am not putting the ice and water shield. Why do I do that?

Well, someone looks at ice and water shield. They might just think, wow, that’s just a really nice tarp. We don’t know the significance. I’ll tell you real quick, the significance of why ice and water shield is so powerful and so needed, uh, in the valleys of your residential roofing home. If you have a steep slope roof, um, I say water shield itself. When you put a nail through it, it closes in around the nail. And so it literally creates a water tight barrier. That’s three foot wide going all the way in entirely down your entire, um, Valley of your roof. Whether you have California Valley, whether you have a metal Valley, it doesn’t matter what style of threading and putting together the Valley. You do. I highly highly recommend that you choose a roofer that uses ice and water shield now. So is there an ice and water shield product that we can use in commercial roofing Tulsa?

We, yes, it is. It’s called ice and water shield. We can use ice and water shield on smaller roofing areas to create that same type of barrier. But let me tell you, there’s some different aspects about commercial roofing, um, that we do not want to create an entire waterproof barrier under the, or the, the above, um, roofing membrane, uh, in an entirely waterproof, because let’s say something happens. Um, and you get a large leak in a roof here in commercial roofing Tulsa you call for our roof nerds to come out. We find the leak, we open up your roof and we find there’s 800 gallons of water stuck inside the roof, but none of the water’s coming out. You’re creating dramatic over weight for your roof and you’re saturating your entire roof causing to be allowed to have a lot of problems. And so with that being the case, you want to be able to have your roof to be able to allow water, to leak at some pressure points.

At some time you did not want to create a substrate that is 100% waterproof. It is the absolute job of the, the upper membrane, the actual roofing membrane that sitting in the L elements, uh, here in commercial roofing Tulsa with our roof nerds, working on your roof. It’s the job of that exterior upper membrane. That’s in contact with the elements to keep all the water out it’s it’s job getting inside the roof. You did not want to create a huge pond of water that saturates all your insulation, that saturates all your fiber board in an era at your entire roof. And then you’re creating a bigger problem than ever before, much, much, much bigger problem. If your upper membrane leaks, you want it to be able to flow right on through now. That’s, what’s wonderful about thermoset and thermoplastic membrane systems. We screw screws all the way through your decking.

Now that screw hole, where that screw goes through, it will allow water to leak out, to show you when there is a leak. Some people don’t really understand part of, part of a roofing system. Is it been, is it allowing you to know when it’s leaking and when there’s a leak in the exterior element, upper membrane of the roof, that’s just part of what you’re supposed to do. And that way that, you know, there’s a leak that way you’re not having extreme excessive water buildup and really just destroying your entire building. And so here with commercial roofing Tulsa, there’s a few things we want to talk about. Um, the, a few more differences between the residential and commercial side. Um, and then also we want to talk about just really have an insurance for both in the state of Oklahoma. You’re required to have up to 1 million, uh, inch, Oh, I’m sorry.

There’s a few things about our company. Um, we don’t try to be sneaky. You know, we’re not these outfits down out of town, storm chasers that are just trying to find someone to take advantage of. That’s not how we operate. Now. I personally lived here 21 years, 20 or 21 years while I moved here in 1998. So we’re probably talking about 22, 23 years that I’ve lived here in Tulsa and broken air, the greater Tulsa area, Tulsa, commercial roofing. And so the one thing you want to keep in mind is there’s a lot of storm chasers. We are in the buckle of the Bible belt and we here in the buckle of the tornado in the storm belt. And so because of that, we have a lot of good people here, but a lot of bad people can be here or come through here. And I hear so many stories of them trying to get so much check in and then walking away and not finishing the roof, not finishing the project.

That is not something you find from us, but we’re equipped at the same time for any type of general contracting task or roofing task that you need. And really, if you ask around you talk to people that know us, you’ll see, even with our Google reviews, our reputation here in commercial roofing Tulsa really does speak for itself a well over 15 years of working in the construction scene with roofing in well over right at, uh, probably 18 years working in the general contracting and rehabbing and construction department in residential and commercial, uh, I would say it was probably about 15 years ago. I was over about $40 million of commercial properties that I was managing and taking care of all rehabbing and construction, building new roads, doing new roofs, uh, doing tons of service to the, the structures in the commercial buildings. And so those are the things that we’ve done for many years, tons of experience, tons of project management capability.

And, and it’s the big things that we keep our eye on. It’s also the simple, simple things like a missing shingle, a lifted shingle from the side, you know, something like a parapet wall, the coping cap isn’t tight. You know, if you have a parapet wall that the, the, um, fasteners, the screws or the nails are not holding place and it’s getting loose, I mean, that needs to be addressed. That’s going to let water inside your wall. You’ll beginning water in the walls of your building on a minimal effect that could cause mold can cause rusting cause problems. And here until in commercial roofing Tulsa, you could never know that’s even taken place. So those are the things that we’re always looking for. H vac unit leaks, the curbing being done, right. When we put on a TPO roof, the, the specific design of how we have to put the curbing together really is extremely water type.

And so if you’re needing anything Oh, for your commercial roof, for your reser residential roof, our roof nerds absolutely build smart roofs. We give a free estimate, free quotes. We come out, uh, after you call us at (918) 973-1010. We’ll come out and, uh, you can even email us at advanced, okay. At cox.net at advanced, okay. At cox.net, check us out online at www dot, OK. Roof nerds.com and give us a call, let us know what we can do for you. We appreciate the wonderful people that we deal with here in Tulsa and broken arrow, because we build smart roofs.